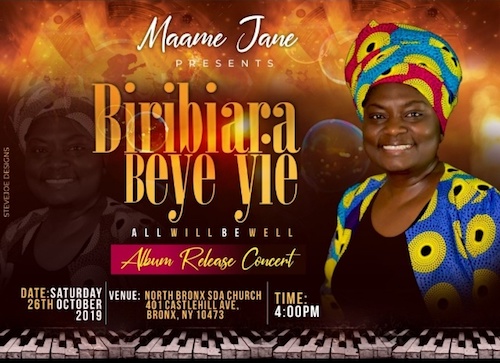 Celebrated Ghanaian gospel artist, Jane Ama Asantewaa Appiah-Okyere, popularly known by her followers as Maame Jane, will be releasing another inspirational and motivational album titled “Bribiara Beye Yie“, (All will be Well ).

The event will be an album release concert that will take place in New York (NY) on October 26, 2019.

According to Oppong Clifford Benjamin of TheAfricanDream.net, the inspiration behind Maame Jane’s songs is God’s love that will not let us go!

“As a Sinner saved by Grace, I can only yield to God’s will,” said Maame Jane, a Seventh Day Adventist (SDA), who added that her parents, as well as her husband, have been great sources of inspiration in her music ministry.

Just like her first album titled “Yesu Me Gefuo” (Jesus My Savior) released July 4, 2015, which contained her most popular songs like “Ene Nyame Nnko” and “Me Kronkronye Fri Awurade”, all composed by Newlove K. Annan,  said Maame Jane to TheAfricanDream.net about her yet to be released album reported Oppong Clifford Benjamin.

Read Also: CELEBRITIES WHO INSPIRE US

“Songs on this new album are unique but blend well with mainstream gospel music. She said her songs on the album are “mainly meditational and inspirational. After enjoying all life has given to us, we need to have time to reflect and connect with God during our time with Him,” the singer said.

Fellow Adventists Gospel singers Precious Hannah and Adwoa Benewaa Larbi will be among the special performers at the album release concert to happen at the North Bronx SDA Church at 401 Castlehill Avenue in Bronx, NY.

Also on the bill will be performances by some Ghanaian SDA Youth Choirs.

When she’s not doing music, other things that engage her are gardening, the Gospel act told Mr. Benjamin that:

“I love to work in my little garden, Having fresh tomatoes is a joy.  I also love spending time with the youth and young adult. I try to encourage them to strive for the best in their education and also their commitment to God in all they do…“

Maame Jane has worked with Syracuse University, a private research university in Syracuse, New York for 14 years. She is currently a Business Analyst.

Check out her official website at praisealways.com to learn more about her and be teased by one of her old music videos in this link https://www.youtube.com/watch?v=OTatiVjBevY as you await the new album. 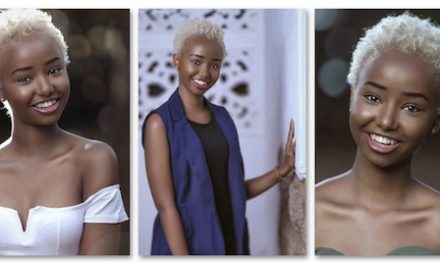 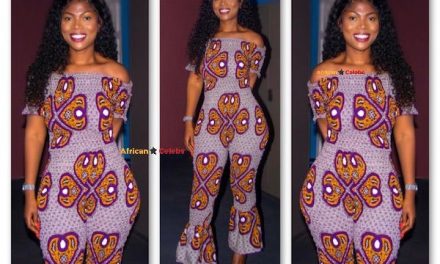